As the result of disappointing migration conditions that were present when we held this field trip last weekend, along with the promising forecasted wind for Ocotober 8, we decided to run this hawk watch event again – and it turned out we were right. A strong cold front had passed through the state on October 7, and it was followed by fairly strong northwest winds, so the temperature was only 39 degrees as folks began gathering in the lower parking lot near the beach. As usual, our group this morning gathered in the lower parking lot (near the beach), and consisted of fourteen birders.

The winds were moderate as we began, but they were coming from the northwest, which we knew was good for migration – and we were starting to see a fair amount of activity from the parking area. In the woods along the grassy lawn there were quite a few Yellow-rumped Warblers present, along with Black-throated Green, Blackpoll, Nashville and Tennessee.

The group also had nice looks at a Blue-headed Vireo, as well as both kinglets, both nuthatches, Eastern Phoebe, and Red-headed Woodpecker, and an Eastern Towhee called from the bushes. A couple of Sharp-shinned Hawks passed overhead, along with Turkey Vultures, an Osprey, Canada Geese, and a few gulls. 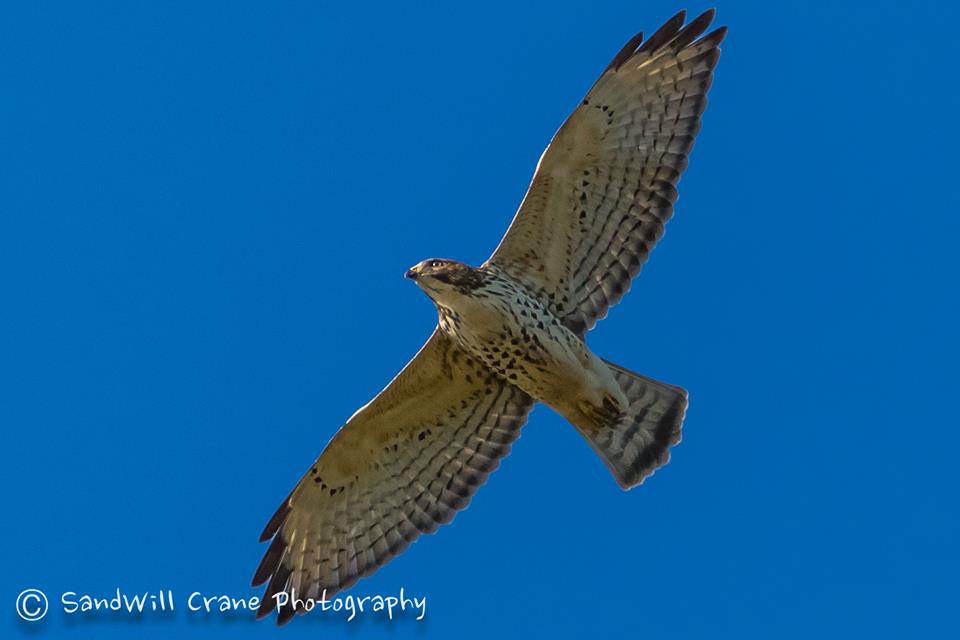 After about an hour the group walked to the south to check out the lake from the beach area. A large group of cormorants flew past, and we had a few grebes, gulls and a Red-breasted Merganser, but otherwise the lake was pretty quiet. A couple of Bald Eagles flew over, and we spotted a couple of Broad-winged Hawks and a few accipiters on the move, so a little before 10:00 we decided to drive over to Hwy. D for a better view of the sky to the north.

We were awfully glad we did, because there was a constant series of raptors migrating our way.  Sharp-shinned Hawks comprised most of the birds (we ended with about 81), but we also had Cooper’s Hawks (27), Red-tails (16) and Northern Harriers (6), along with about 39 Turkey Vultures. Given the great hawk movement that we were seeing from this new vantage point along Hwy. D, we were wishing we had moved to this spot a little earlier!

Part of the group headed down to Forest Beach Nature Preserve to end the field trip – and to participate for a little while with their “Big Sit” bird count.

It definitely turned out to be a very fine day for our hawk watch, and those attending had great opportunities to view many birds as they passed overhead on their southward migration.  Thanks to everyone who participated, and to Jeff Baughman for co-leading the field trip.