The weather the morning of Friday the 23rd on Wisconsin Point was fabulous, with just a few clouds, and a beautiful orange sunrise sky from the beach behind parking lot #1. The wind was blowing moderately strong from the northeast and the temperature was 54 degrees at 6:30 AM, as birders began gathering. Bald Eagles and gulls were flying about, a few Mallards went winging past, and a Common Loon was spotted swimming offshore.

The first Parasitic Jaeger of the day was observed at 7:08 AM, a third-year bird that looked very adult-like – and it provided a great thrill as it flew off toward the west. This turned out to the first of many jaeger sightings – in fact the action was nearly nonstop all day long. We probably never went more than 10 or 15 minutes without seeing one!

Judging from the various ages and plumages that we observed among the Parasitic Jaegers, we figured that we probably observed at least SEVEN different individuals over the course of the day. These included at least 3 juveniles (two were quite dark, and other was light/intermediate), one 2nd year bird, two 3rd year birds and one full adult. At least a couple of times during the day there were at least four jaegers in view at one time! 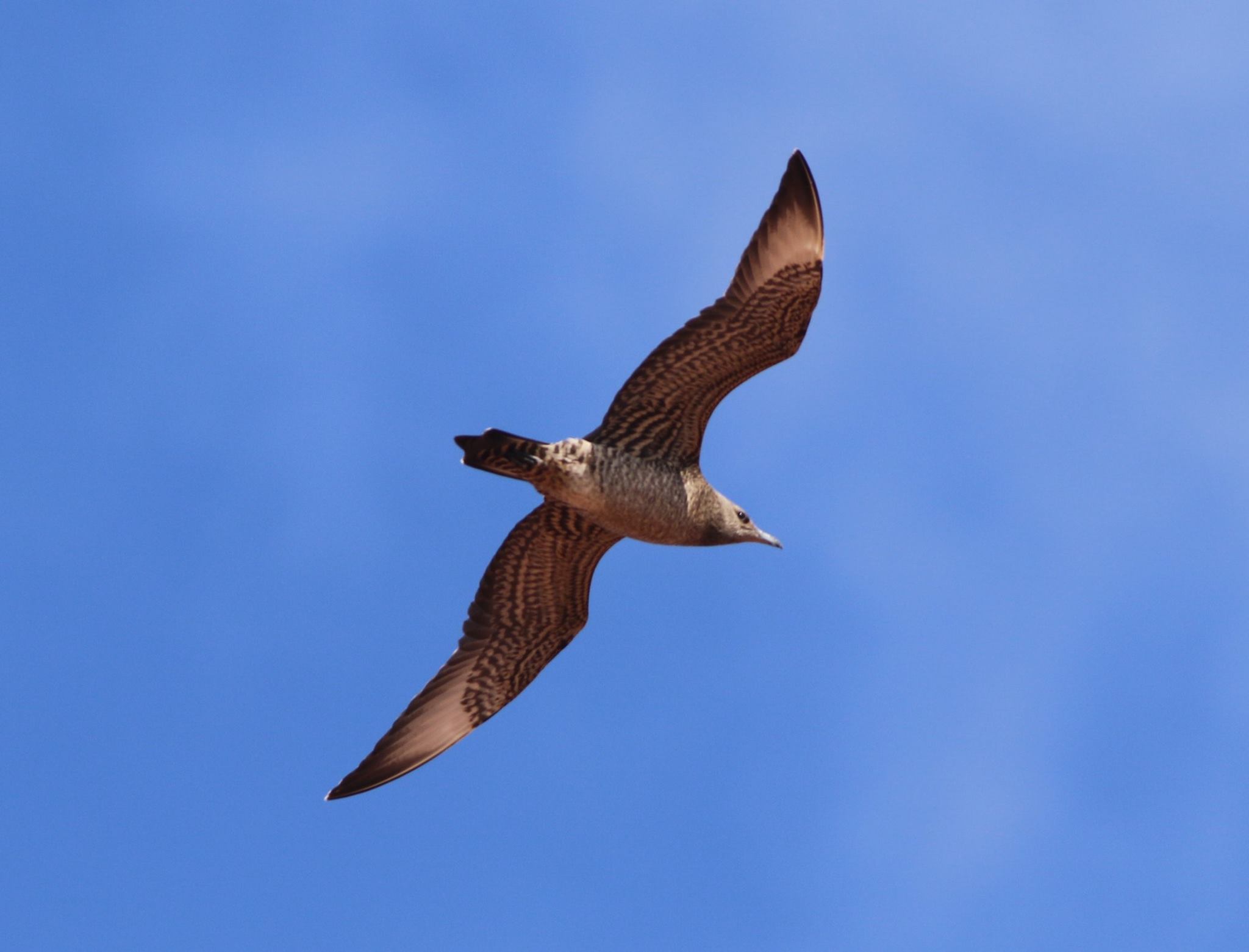 Around 7:13 a Peregrine Falcon came flying down the beach from the west, providing good looks as it passed behind the group just over the treetops. A little while later there about 20 Bonaparte’s Gulls in view, and a nice flock of ducks few past that included a number of Northern Pintails and at least one Green-winged Teal. By this time there were at least 25 birders present, and more continued to arrive throughout the day – eventually totaling about 70 persons.

This year our Jaegerfest field trip (the 18th year) was celebrated by a new t-shirt that was designed for this event, available for $15 in two colors – ultramarine blue and medium-dark gray. They went like hotcakes, and there were about 60 shirts sold by the end of the weekend.

At 8:15 there was great excitement down the line as a juvenile Sabine’s Gull was spotted, and a number of the birders present were able to get good looks as it flew from near the beach and headed north toward the Minnesota north shore. There were also a few birders out on Gull Bluff who also reported seeing one, along with good looks at a Pacific Loon that was present for about an hour.

Folks who arrived a little late (and also individuals who hadn’t been able to spot it from the beach) had another chance for Sabine’s Gull a little while later, when a juvenile (perhaps the same one?) was spotted swimming among Ring-billed Gulls on Allouez Bay about 8:45. It remained in place for at least 10 minutes, and many birders had opportunities to get good scope views of this diminutive gull. All of a sudden the bird flushed (along with the other gulls) – probably by the Bald Eagle that suddenly appeared – and folks got a chance to view its distinctive, flashy wing pattern as the bird gained elevation and soon headed out of sight. A little while later a Lesser Black-backed Gull was also spotted on the bay.

At various times during the late morning and the afternoon, birders would take a walk or drive further down the road, looking for passerines along Wisconsin Point. Several warbler species were spotted in various places, along with Northern Flickers, Hairy and Downy Woodpeckers, and also a Red-bellied Woodpecker. A few Swainson’s, Gray-cheeked and Hermit Thrushes were also found, and several species of sparrows, including Chipping, Fox, Lincoln’s White-crowned, White-throated and Northern Junco – and one lucky birder apparently got a brief look at a Harris’s Sparrow.

On Saturday the 24th the skies over Wisconsin Point were quite cloudy, but the northeast winds continued, and the temperature again started around 54 degrees. As usual, the day started with lone Bald Eagles flying over in the dim light, followed soon by increasing numbers of gulls.

The first Parasitic Jaegers were spotted at 7:08 (both probably 3rd year birds), followed sooner by sightings of more jaegers. As happened yesterday, there were continuing views of jaegers – seemingly every few minutes – and once again, there were at least a few occasions when 3 or 4 were being seen simultaneously. From what we could tell, most or all of these individuals were likely the same ones we had seen previously – but impossible to know for sure.

Around 8:00 it started sprinkling, and many folks ran to retrieve their raincoats and plastic for covering their spotting scopes. Fortunately the rain didn’t last too long, but it did put a damper on the birding for a while.

There were duck sightings over the lake from time to time, including both Red-breasted and Common Mergansers, and a group of nine Northern Pintails was also observed. About 8:40 there were three Surf Scoters spotted on the water, but after a short time they took off and headed east. At about 10:45 a Sabine’s Gull was sighted off in the distance, but unfortunately it didn’t come in for closer views.

This year, with the waters of Lake Superior being fairly high, in combination with the northeast winds, there wasn’t very much beach present – and that seemed to correspond with a very low number of shorebirds. A single Spotted Sandpiper was observed, a couple of flocks of Black-bellied Plovers were spotted, and at one point three Sanderlings flew past the group down the beach, but that was about it for shorebirds during the field trip this year. As usual, groups of birders periodically left the beach to wander further down the road to look for passerines. Many of the same species that had been spotted yesterday were once again present, along with Brown Creeper, Philadelphia Vireo, Winter Wren, Gray Catbird and Merlin.

In the afternoon on the beach the periodic jaeger sightings continued, but the highlight was a juvenile Lesser Black-backed Gull that was spotted among the Ring-bills that had gathered on the beach and just offshore (in response to our continuing offerings of bread and buns). The Lesser provided great opportunities for close observation, and many photos were taken. 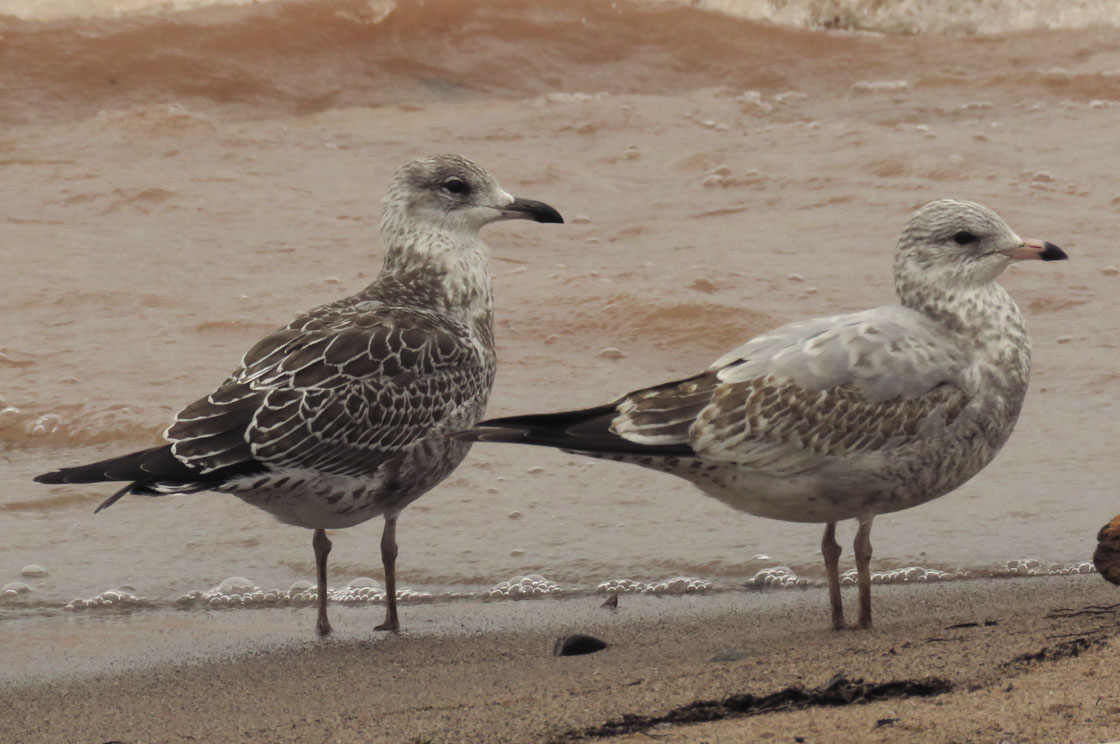 Sunday morning was once again very cloudy at dawn, and rain was in the forecast. There were light sprinkles in the air from time to time, with steadier showers on the way. The temperature was fairly mild (low 60s) and the breeze had shifted to the southeast, so the wave action on the lake had diminished quite a bit.

The predicted showers had resulted in early departures for most of the birders, so only about a dozen showed up on the beach between 6:30 and 7:00 AM. Once again, Bald Eagles were the first birds on the scene, followed shortly by gulls flying well offshore. A few Common Mergansers flew past, and a group of Bonaparte’s was seen in the distance, along with 7 Common Terns a short time later.

About 7:30 a Sabine’s Gull, a Franklin’s Gull and a couple of jaegers were all spotted in the direction of Gull Bluff, so several birders decided to re-locate over there. The Sabine’s was spotted swimming on the water, and there were a couple more views of jaegers, but soon the rains started to fall more steadily, so most birders decided to pack it in around 8:00 and start the long drive home. A few remained on the beach at parking lot #1 for a while longer and observed more jaegers and a male Surf Scoter.

Although overall attendance was down a bit this year (perhaps due to the forecasted rain showers), we still had about 70 persons in attendance both Friday and Saturday, including a number that were there one day and not the other. Thanks to everyone who attended, and to Jeff Baughman for co-leading this fun event! 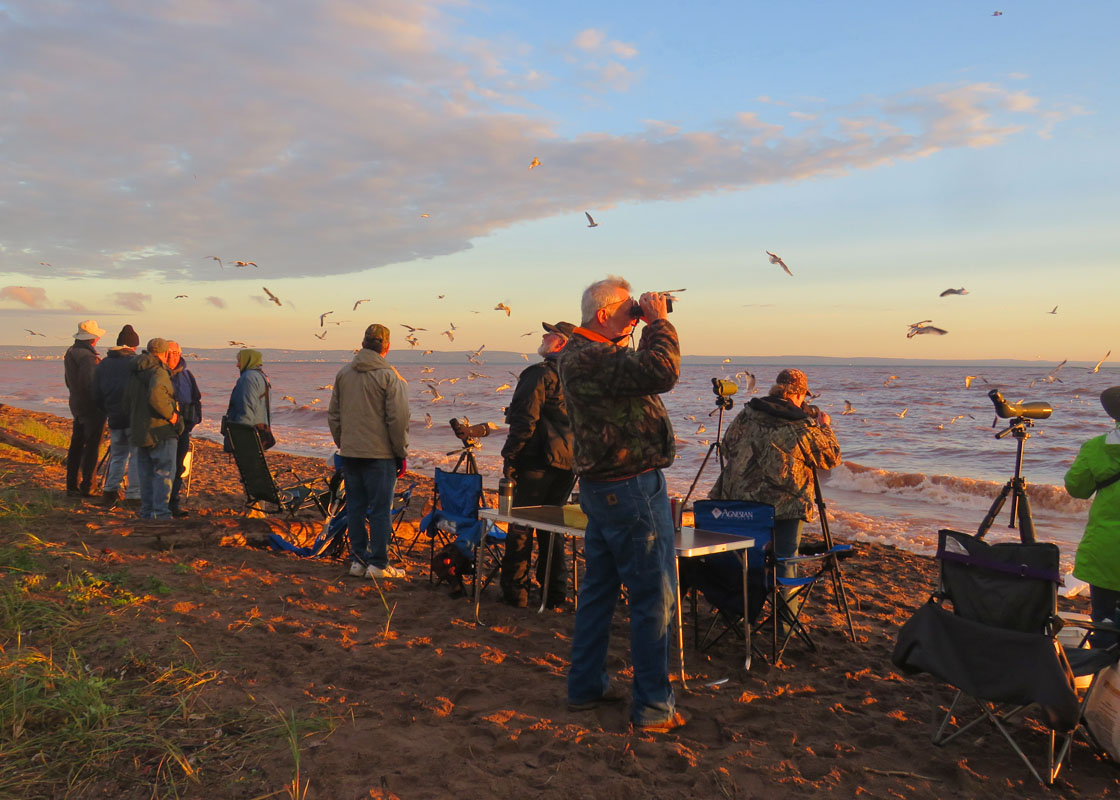