Most of the 14 participants in WSO’s 2016 tour to Costa Rica, led by Tom and Wendy Schultz, met in Milwaukee on the evening of Feb. 24 and flew out at 5:55 the next morning. After a stopover in Atlanta, we arrived in San Jose around 1 p.m. and met our guide, Kevin Easley, loaded our gear onto our coaster bus, and were off –- surrounded by the new sights, sounds and birds of Costa Rica!

The first site we visited was Tapantí National Park, near Orosi – our home for the next several nights. Tapantí is in one of the wettest regions of the country, with 250-300 inches of annual rainfall, so it shouldn’t have been unexpected that we had nearly steady light rain for much of our first morning. Near the entrance we found a Green-fronted Lancebill (hummingbird), and a number of other highlight birds, such as Black-faced Solitaire, Spotted Barbtail, Prong-billed and Red-headed Barbets, and spectacular looks at a young Ornate Hawk-Eagle! 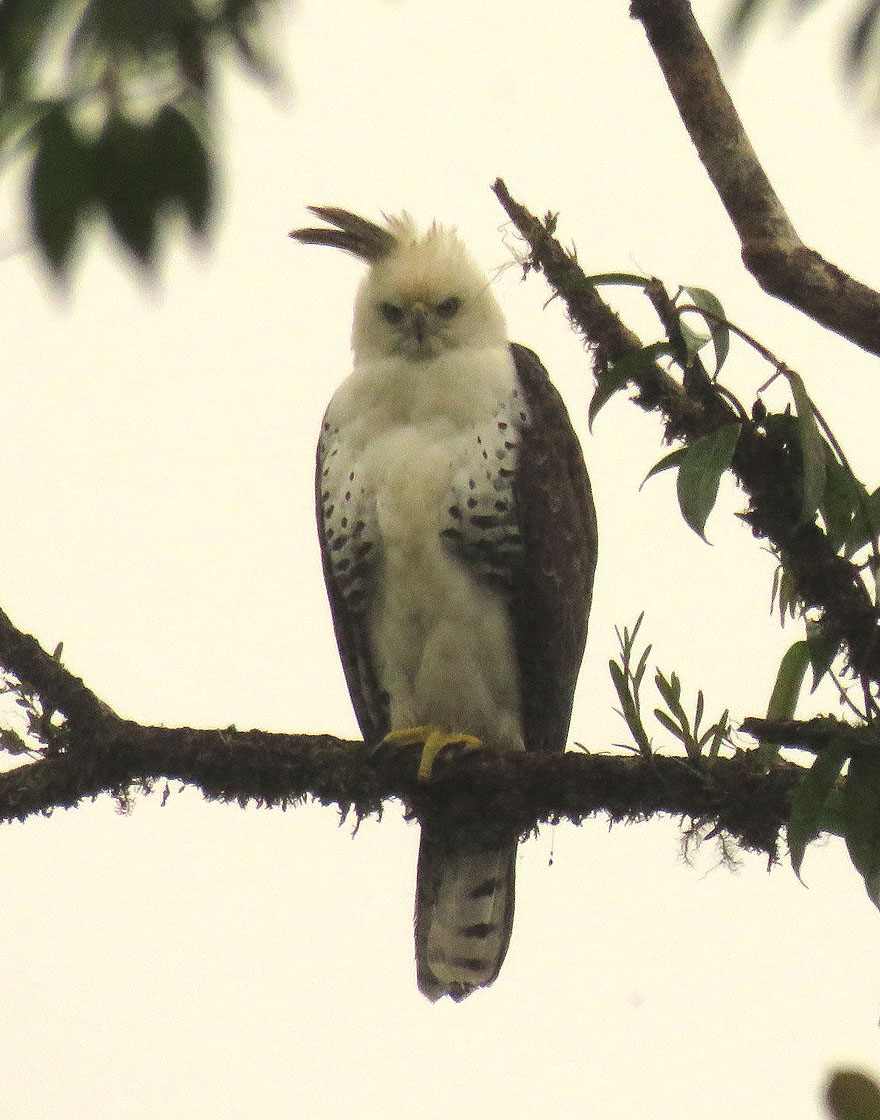 Our next day took us over to Irazu Volcano National Park, with stops along the way to view Buffy-crowned Wood-Partridge, Bareshanked Screech-Owl and the spectacular Resplendent Quetzal. At the park, many of us hiked up the trail to view the huge crater of the Irazu volcano, followed by good looks at Volcano Junco and Volcano Hummingbird -– both limited to the high mountain peaks.

Our destination that evening was Savegre Mountain Lodge, and arriving around dusk learned that the electricity was out. It was somewhat of a challenge settling into our rooms, and then making our way to the dining room for a candlelight dinner. Power finally came back on around 10:30 p.m.

One of the highlights the next morning was viewing a couple of Spotted WoodQuail, as they scratched through the forest floor. Flame-colored Tanagers and Slaty Flowerpiercers were also found, as well as Stripe-tailed Hummingbird. After breakfast we boarded trucks that took us to highland trails where we found Ruddy Pigeon, Yellow-winged Vireo, Spotted Woodcreeper and many others.

After lunch we found Chestnut-capped Brush-Finch and Spangle-cheeked Tanager before boarding the coaster bus to visit Miriam’s restaurant and view her bird feeders – where many fabulous birds were in close view. The highlight was having a Resplendent Quetzal fly into a close tree at eye level. Dusky Nightjar topped off the day.

Bound for the Pacific

On March 1 we were out for an early walk, finding good birds like Scarlet Macaw and Ferruginous Pygmy-Owl, then visited Carara National Park for a hike along the Sendero Trail. Many exciting birds were found, including Chestnut-backed Antbird, Golden-crowned Spadebill, Orange-collared Manakin and Bright-rumped Attila. On the way back to Punta Leona for lunch we made a quick stop along a Pacific beach and saw Magnificent Frigatebird, Brown Booby, Brown Pelican and Royal Tern.

After lunch we returned to Carara National Park to hike a different trail, finding birds like Black-throated Trogon, Riverside Wren, and Black-hooded Antshrike. In the late afternoon we settled down near a small wooded stream to watch many birds as they came in to drink and bathe, including Red-capped and Blue-crowned Manakin, Chestnut-backed Antbird, with Ruddy QuailDoves, Great Tinamou and Streak-chested Antpitta nearby on the forest floor.

The following day took us north to the Guacimo area, in a quest to find representative birds of a new habitat – tropical dry forest. We found birds like Stripe-headed Sparrow, Gartered Trogon, White-lored Gnatcatcher and Double-striped Thickknee (a large plover relative). At a wooded stream we saw Yellow-olive Flycatcher, Olive Sparrow, and Turquoise-browed Motmot – and a couple of winter residents, Northern Waterthrush and Broad-winged Hawk.

A visit to a mangrove swamp produced Mangrove Vireo, “Mangrove” Yellow Warbler, Common Black-Hawk and the beautiful American Pygmy Kingfisher. At sunset there were groups of Yellow-naped Parrots and Orange-fronted Parakeets, along with Costa Rican Swifts and Lesser Nighthawks.

On to the Arenal volcano

On March 3 we headed toward the Arenal volcano, arriving around 7 p.m. to be greeted by a beautiful Black-and-white Owl near the entrance sign. The next morning, Montezuma Oropendolas were plentiful, feeding on watermelon slabs, and joined by Green and Red-legged Honeycreepers and Passerini’s Tanager. A walk on the beautiful grounds provided great looks at Buff-rumped Warbler, Keel-billed Toucan, Cinnamon Becard and Red-lored Parrot. After breakfast we hiked some nearby trails and saw Golden-olive and Black-cheeked Woodpeckers, Whitethroated Shrike-Tanager, Golden-crowned Warbler, and White-ruffed Manakin. After lunch we added White-throated Thrush, Rufous-tailed Jacamar, Keel-billed Motmot and Great Antshrike. 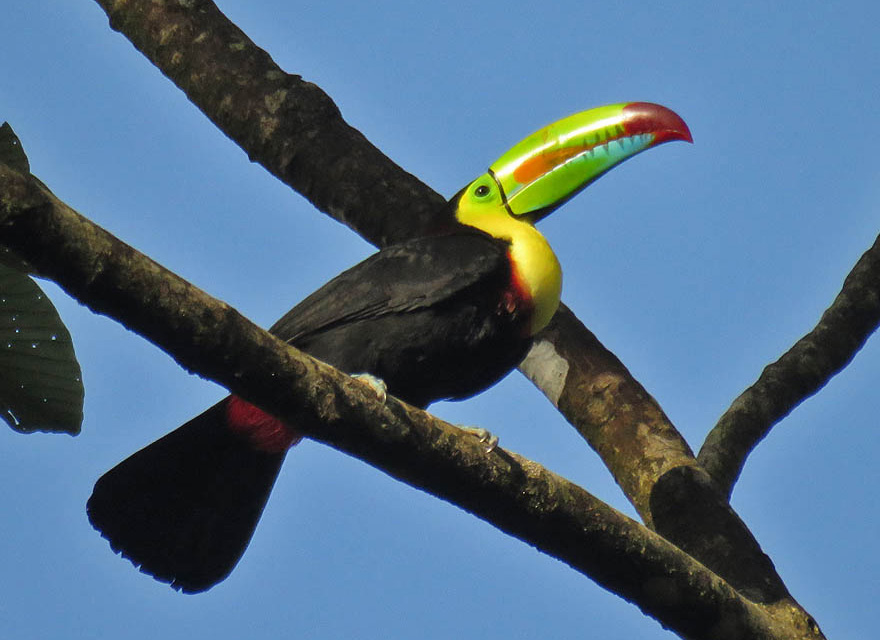 On March 5 we walked to a vantage point overlooking a big valley and were treated to birds like Long-tailed Tyrant, Black-cowled Oriole, Slaty Spinetail and Tawny-capped Euphonia, with nice scope views of Threewattled Bellbird and Lovely Cotinga. After breakfast, we hiked a nearby trail, finding Russet Antshrike and Orange-bellied Trogon, then a little ways down the road we spotted a Rufescent Tiger-Heron on a roadside stream, followed shortly by a King Vulture soaring overhead.

We started working our way north toward Caño Negro, with stops to see Scarletrumped Cacique and Plain Xenops; in the afternoon we took a boat ride up the Medio Queso River, where we had nice looks at Northern Jacana, Purple Gallinule, Southern Lapwing and Fork-tailed Flycatcher. After sunset we continued on to the Caño Negro Natural Lodge for dinner and bedtime.

After an early morning walk and breakfast we boarded another boat to travel along the Rio Frio River, where we saw Limpkin, Nicaraguan Grackle, Gray-necked Wood-rail, and Chestnut-colored Woodpecker – but the highlights for many were Sungrebe and Green-and-rufous Kingfisher. A walk through some nearby areas produced Thickbilled Seedfinch, Yellow Tyrannulet, and Black-headed Trogon. Down the road we stopped near a bridge and had great looks at Bat Falcon and Great Potoo, followed by Red-breasted Meadowlark and Pink-billed Seedfinch down the road.

The next morning we left early for La Selva Research Station. This is always a spectacular birding area, and we weren’t disappointed – with looks at Fasciated Antshrike, Rufous-winged Woodpecker and Chestnut-headed Oropendola. Hiking on some of the forest trails added Broad-billed Motmot, Royal Flycatcher and Blue-black Grosbeak, and an Army Ant swarm attracted several Ocellated Antbirds. After lunch we returned to La Selva where we added birds like Great Green Macaw, Olive-crowned Yellowthroat and Shining Honeycreeper. On the way back to La Quinta a riverside stop produced several Shorttailed Nighthawks.

March 8 was our final full day in Costa Rica, as we began to work our way back toward San Jose. A visit to La Virgen Valley brought looks at the stunning Goldenbrowed Chlorophonia, as well as Black-headed Tody-Flycatcher and a soaring Barred Hawk. Late morning and early afternoon were spent at the lovely La Paz Waterfall Gardens, where the highlight were the busy hummingbird feeders. Purple-throated Mountain Gem, Green-fronted Brilliant and Violet Sabrewing were just some of the visitors there. After lunch we hiked down to the river to view the spectacular waterfalls, and then it was back on the bus to travel to our final lodge near the airport -– to share a final dinner together.

Our bird total for the tour ended at 470 species (14 of which were “heard only”); with several participants reporting counts of new life birds of over 350!