There was a bit of orange glow in the eastern sky as we gathered around 5:00 AM on May 7, but for the most part the sky was pretty cloudy. The temperature was fairly moderate, but there was a stiff wind blowing out of the north, which made it a little more challenging to hear the bird sounds around us. Not far away an American Woodcock was peenting and doing his flight display, and a Wilson’s Snipe winnowed over our heads. The ringing notes of Swamp Sparrows was probably the predominant sound, but on occasion we could hear the pumping calls of an American Bittern, and Sandhill Cranes called loudly in the distance.

Altogether we had about 15 people gathering at our meeting point, and then around 5:30 we began a slow hike down White River Road, listening for various birds along the way. A few Soras could be heard giving their whinnying calls, and at one point a Virginia Rail sounded off. A Gray Catbird was heard in some nearby shrubs, and a few Sedge Wrens were also calling from the sedge meadows.

Several Yellow Warblers were singing from the shrubs, along with a number of Common Yellowthroats and numerous Swamp Sparrows. A small oak island had Blue-gray Gnatcatchers and a cheery House Wren, but other than a single Yellow-rumped, no warblers could be found.

Further down the road, from a nearby wet thicket a Northern Waterthrush was singing his chirpy song, a couple of Rose-breasted Grosbeaks were spotted, and a Pileated Woodpecker was heard in the distance – and then as we approached the White River bridge an Eastern Phoebe was found.

From here the drivers were ferried back to their vehicles to save time and a long walk back to the parking lot, and then everyone continued further west along White River Road. A short walk from a parking area down the road produced singing Wood Thrush and Eastern Towhee, and an Ovenbird performed his ringing call and gave us good looks as he perched in a nearby maple. A little ways further west the group drove in along a gravel road into a mature pine and deciduous forest, and a Pine Warbler was heard singing and later spotted.

At the west end of White River Road we turned north on Hwy. D, and not far down the road a tall white bird was spotted as it stood near the back end of a field – an adult Whooping Crane! After everyone got good looks, and a few photos were taken, the group continued north on D and then parked just beyond the bridge over the White River. Yellow-throated Vireos and Least Flycatchers could be heard calling from lowland forest, and soon a Cerulean Warbler started singing his buzzy song. A Yellow-bellied Sapsucker rapped his staccato beat on a nearby tree, and a Great Crested Flycatcher called a few times.

The group continued east to Big Island Road, where Eastern Meadowlark and Bobolink called from the grasslands. Around the bend there were Purple Martins and Cliff Swallows near a farm, and then another stop produced more Bobolinks, White-crowned Sparrow, and then nice looks at a pair of Orchard Orioles that landed in a nearby tree.

Following a bathroom break at a Princeton gas station the caravan headed over to the village of Marquette, on Lake Puckaway, which we scanned carefully. Swimming or perched in the distance were American White Pelican, Great Egret, Great Blue Heron, and Double-crested Cormorant. Seen flying were Forster’s and Common Terns, and a Warbling Vireo sang from some nearby trees.

Driving toward Grand River Marsh, a Greater Yellowlegs was spotted along the road in a wet, grassy area, but unfortunately no other shorebirds were present. At a cattail marsh we noticed a large white bird sitting atop a low mound – a Trumpeter Swan on a nest, with its mate swimming just a short distance away. Not long after we stopped however, the bird slowly retreated from the nest and disappeared behind it – as though trying not to be noticed. Tree Swallows were busy flying into and around several nest boxes. 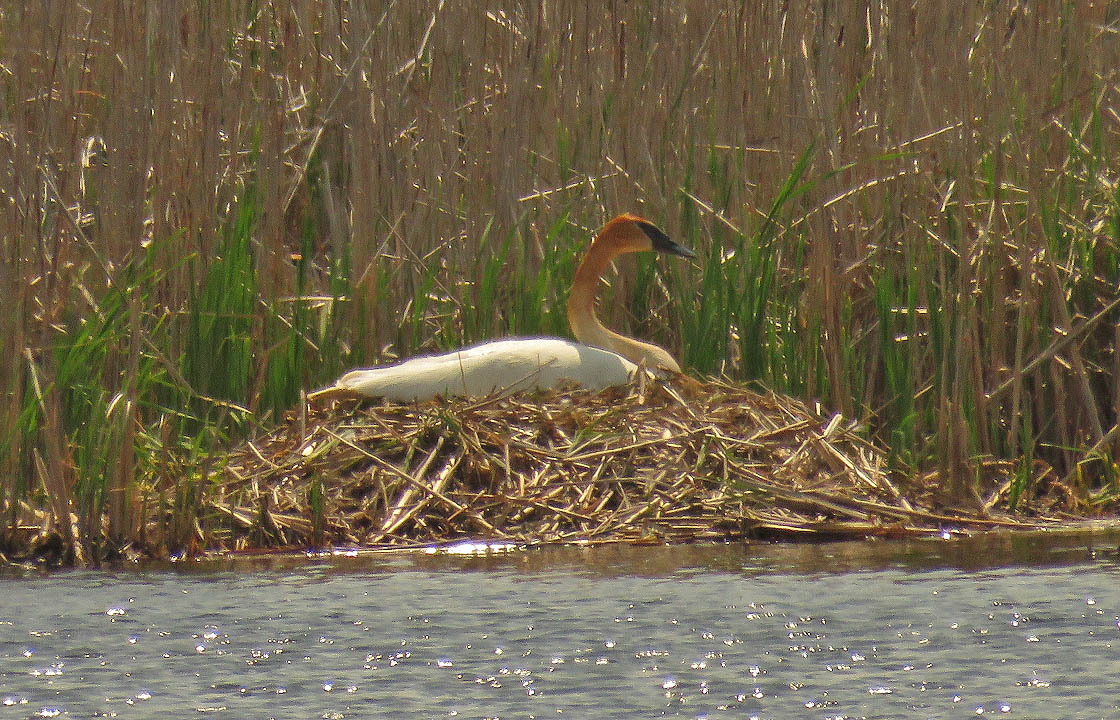 Next we headed over to Lake Maria County Park, which had lots of waterfowl as usual – including a nice variety of ducks, such as Northern Shoveler, Bufflehead, Ring-necked, Lesser Scaup, Canvasback and Ruddy. Several warblers were in the trees near the boat landing, with the best being a Chestnut-sided. Then it was on to our final stop, which was a nearby pond on Lake Maria Road. A few Dunlin and yellowlegs were present, but otherwise just a few ducks.

As we tallied up our bird total for the day we were pleased to discover that we had found accumulated species on the list!