This year marked a new and earlier start time- 7:00 AM- for this popular field trip. We had decided to try an earlier meeting time because in the past we had noted that many geese had flown out from the flooded fields where they had been present just an hour before- and the new starting time appeared to work well for that reason! 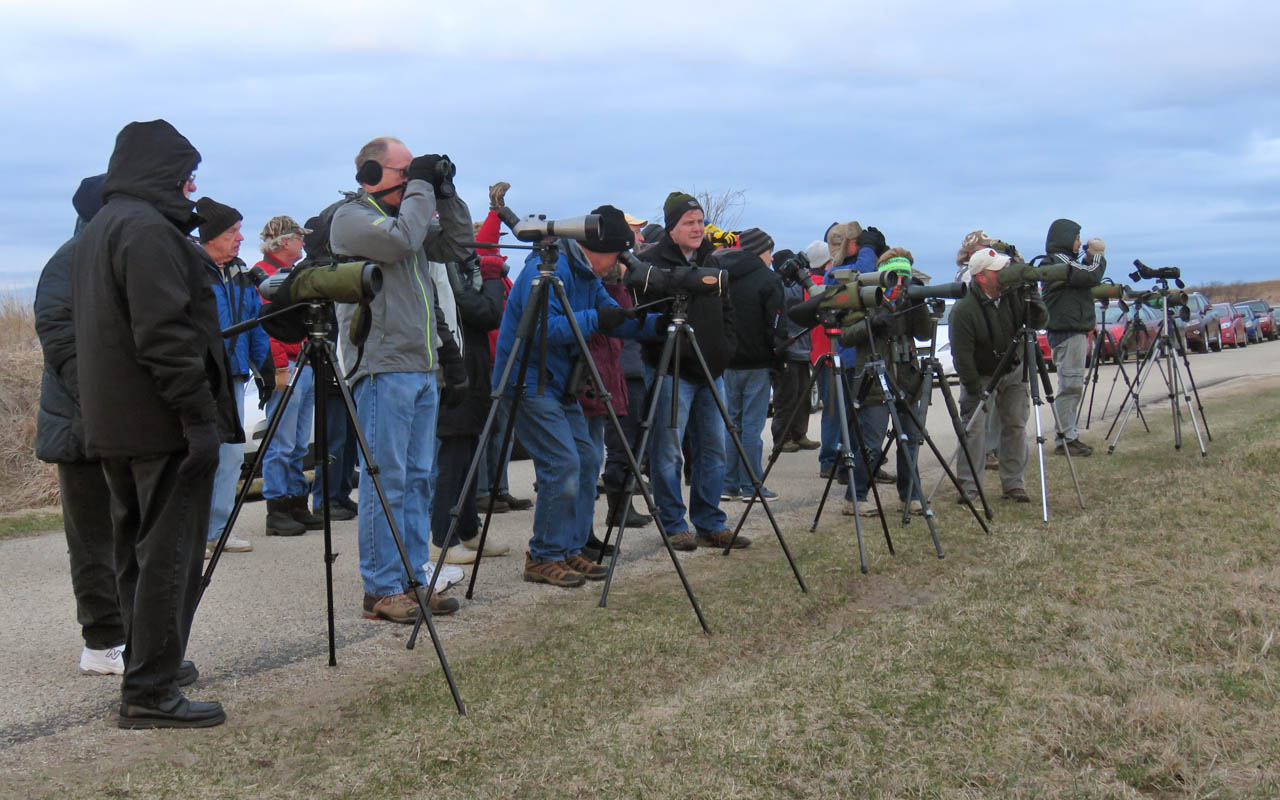 There were about 40 enthusiastic birders present at the Goose Pond meeting point, as we gathered and began scoping through the waterbird flocks. The temperature was just below freezing, but the chill was even more penetrating due to a fairly stiff NE wind and mostly cloudly skies. There were excellent numbers of swans, geese, ducks, etc., present for our arrival- including Greater White-fronted and an excellent number of Cackling Geese. A real bonus was the opportunity to observe a male Northern Harrier as it performed its roller coaster skydance over the grasses of a restored prairie, just to the north.

Our group was greeted by Mark Martin, land manager for the Madison Audubon Society, and he shared maps and information with us about the Goose Pond Santuary and the surrounding wetlands, prairies, and birding sites.

At around 7:40, the group headed over to Harvey Road (north of Hwy 60), where we viewed a flooded field that contained a nice mixture of waterfowl. A few more Greater White-fronted Geese were present (many of which were flying over in flocks), as were Green-winged Teal, American Wigeon, Wood Duck, and Northern Pintail. A Cooper's Hawk and a small group of American Pipets flew over, and Lapland Longspur was heard but not seen in a nearby field.

The caravan of 21 vehicles drove past the DM ponds, which were fairly quiet except for a brief look at a Merlin, and then on to the V Ponds. A decent variety of ducks was present, including Redhead, Canvasback, Lesser Scaup, and Ruddy Duck- as well as a Pied-billed Grebe.

Continuing on to the Hwy V causeway on Lake Wisconsin, the group added Bald Eagle, Red-breasted and Common Mergansers, Ring-necked Duck, nice numbers of Gadwall, and great looks at a Common Loon. 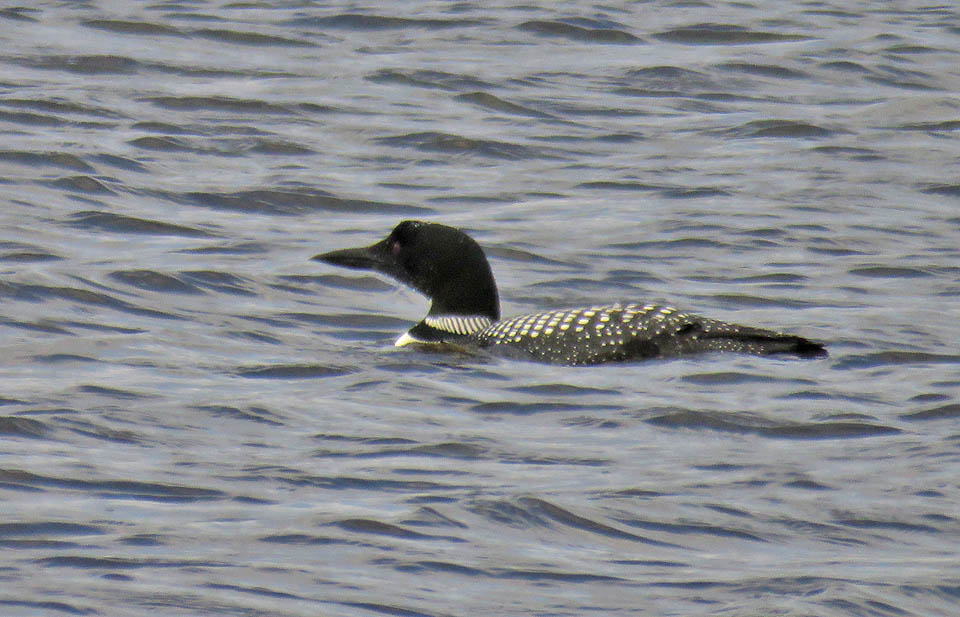 The final stop was at Rowan Creek Park, near Poynette, where we walked the trails back to the White Pine plantation. A pair of Tufted Titmouse was spotted, along with Cedar Waxwings, Downy and Hairy Woodpeckers, Song Sparrow, and Pine Siskin, as well as flocks of Sandhill Cranes and a couple of Turkey Vultures soaring overhead. 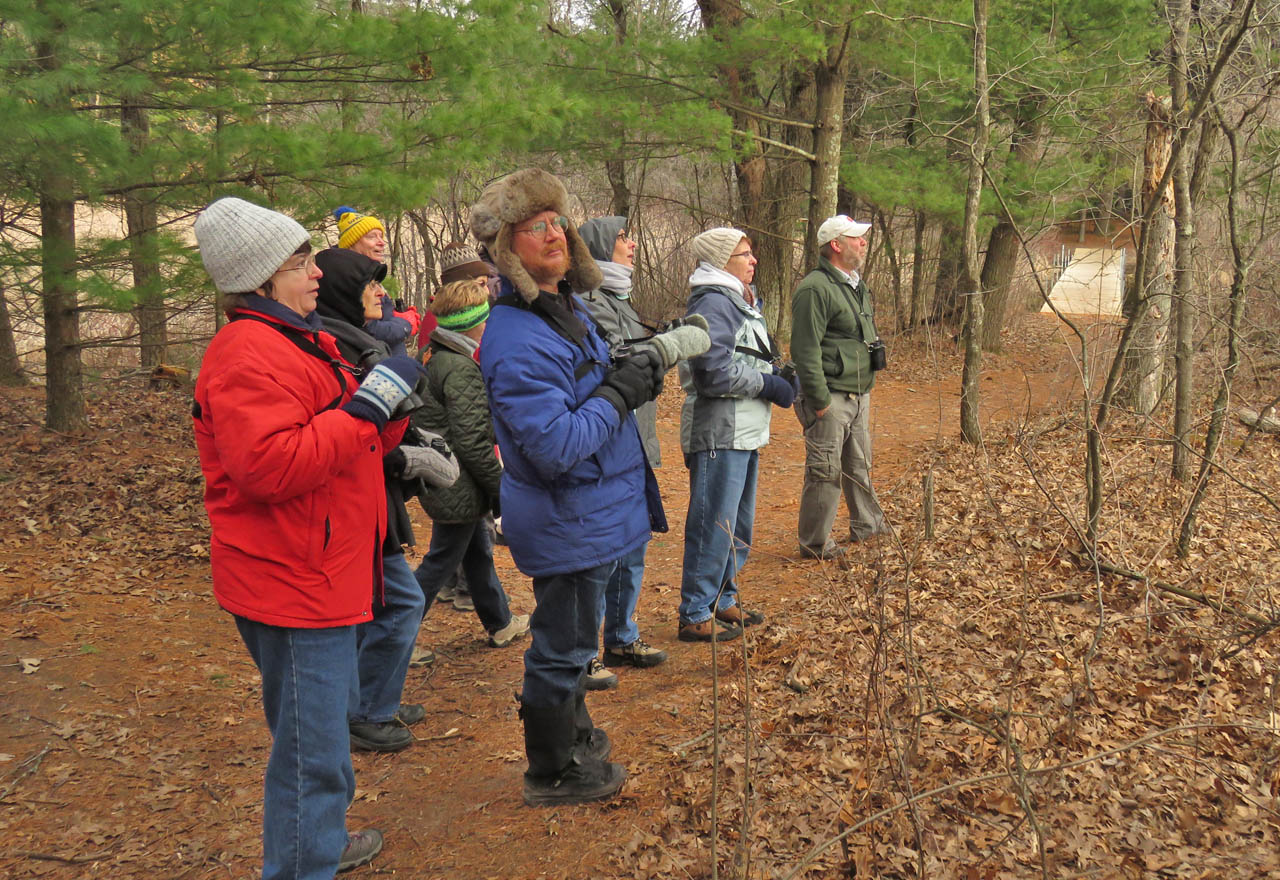 Thanks to everyone who participatd in this early spring field trip, and to Jeff Baughan for co-leading.