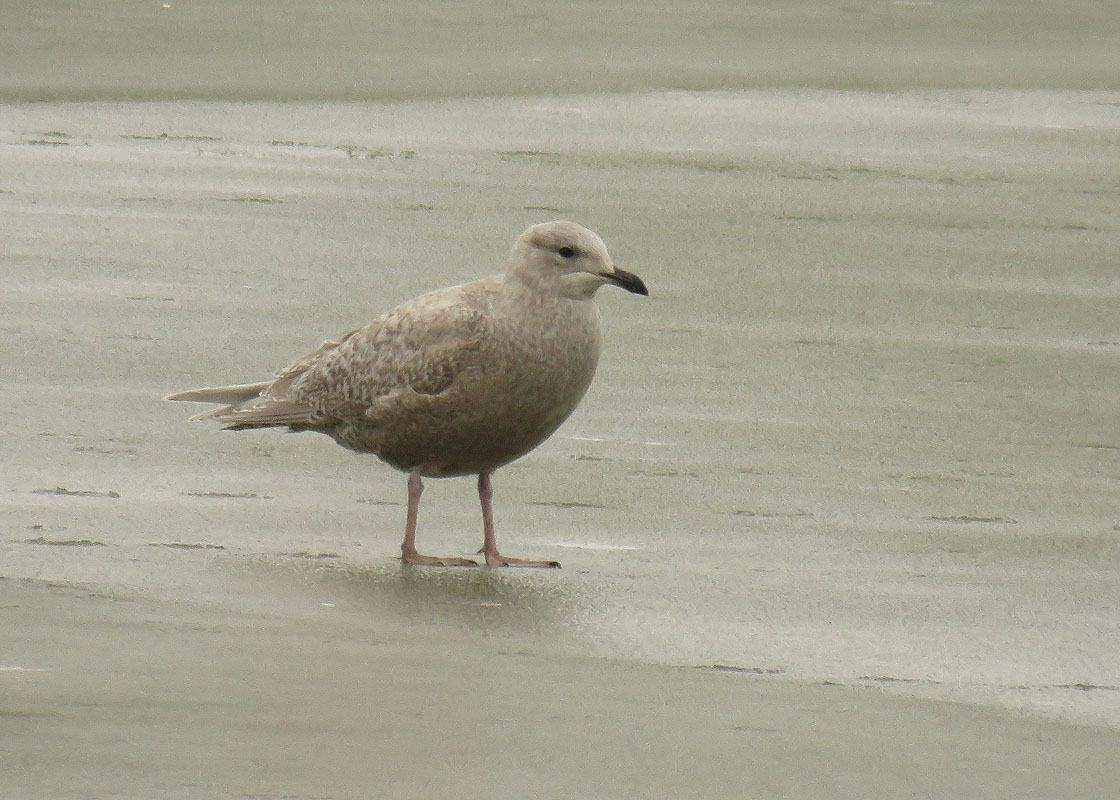 Folks began gathering at South Shore Yacht Club a little after 7:30 AM.  The skies were cloudy, but the temperature was pretty mild for early January – around 30 degrees – and the wind was fairly light from the west – so the day was really quite comfortable (compared to most years!).
Around 7:45 an Iceland Gull was spotted as it flew north toward South Shore from the area of the Texas Avenue Overlook, and it landed on a street light initially, then later out to a post on the marina docks, where it stayed for a while – making it easy for arriving folks could get a good scope view.  Eventually there were about 35 people present for the field trip.
An adult Peregrine Falcon was also spotted, first sitting atop a tall apartment building to the north of us, then a while later it came flying overhead, and then landed on the breakwater rocks just to the east from us.  A variety of waterfowl were observed here in the unfrozen harbor, including Common Goldeneye, Red-breasted Mergansers, Bufflehead and Greater and Lesser Scaup.  A Northern Harrier flew past at one point, and a Song Sparrow was sighted down by the beach.
After about an hour the group headed north to the Ferry Dock, and checked out the harbor birds – including more goldeneye, scaup and mergansers. A group of Long-tailed Ducks flew by outside the breakwall – heading south – although the views were fairly distant. 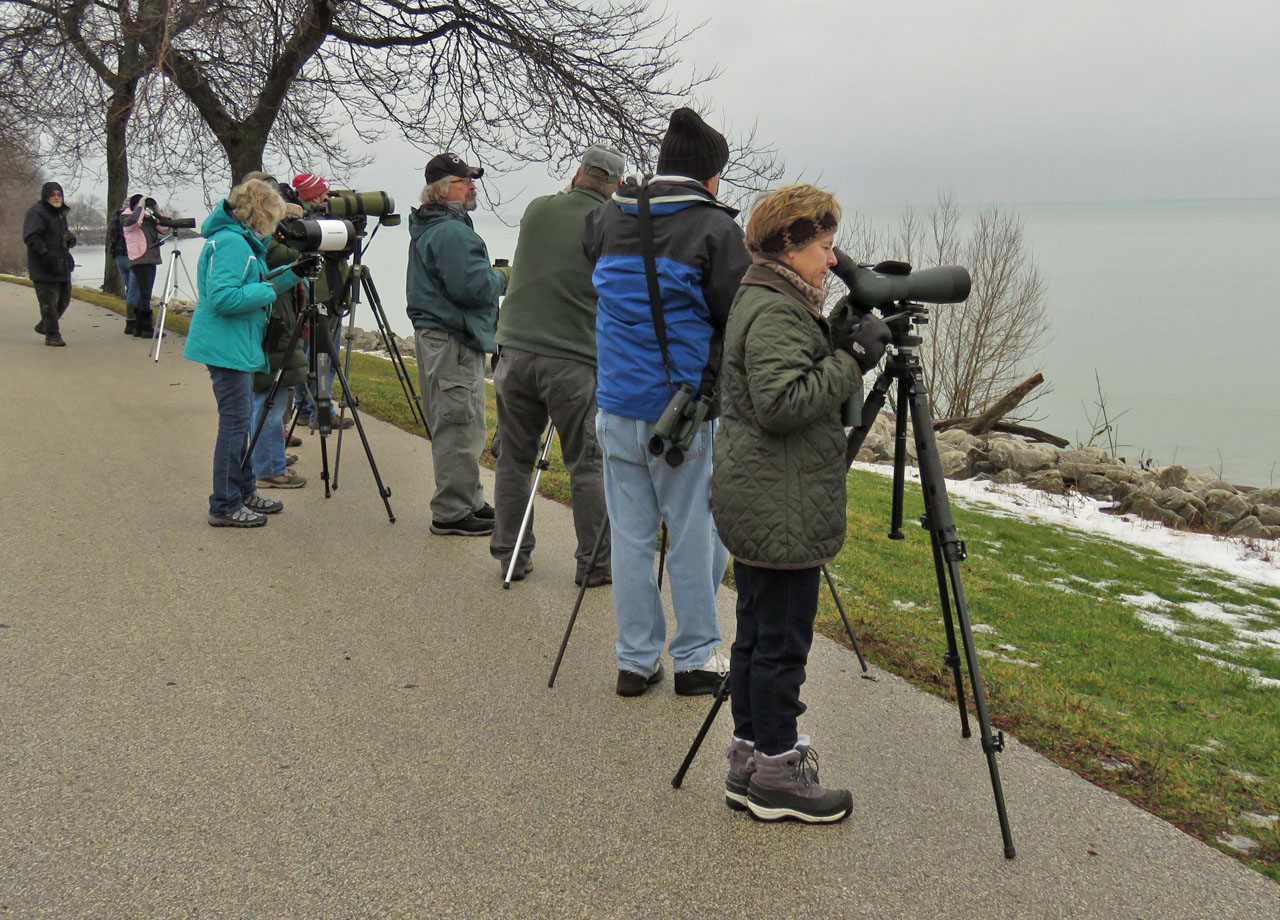 The next stop was at the North Point Snack Bar, where we checked through the ducks floating offshore, but unfortunately no unusual species were spotted.  The same was true at a couple of spots near North Point, with lots of goldeneye present, but no Barrow’s or scoters could be found.  We drove south the Veterans Park, where an adult Glaucous Gull stood out on the ice, in the company of many resting Herring Gulls. 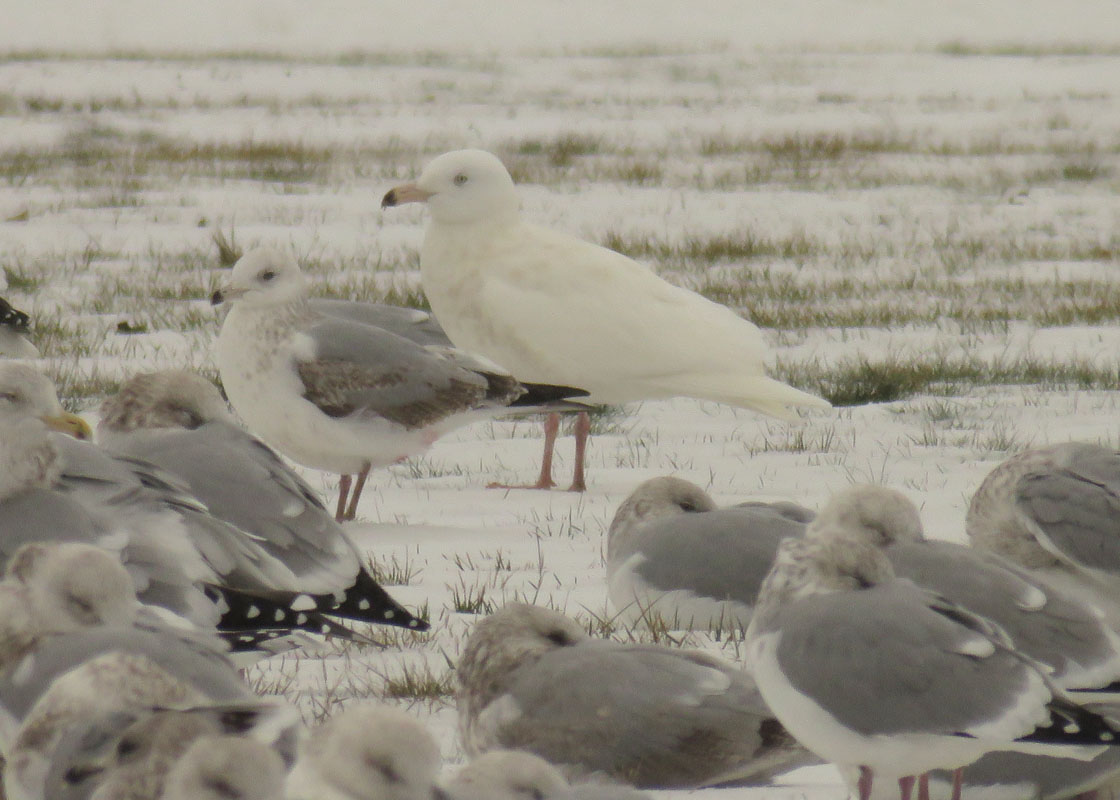 Due to the fact that a Slaty-backed Gull had been present in recent days near the Johnson Creek landfill, along with a variety of other gulls, we decided to take the group out in that direction.  After a quick drive-by past the frozen ponds adjacent to the landfill, which were essentially empty, we headed over the parking lot of Kohl’s.  There were roughly 500 gulls present there, resting on the snowy grass, so we scanned through them carefully.  Unfortunately the Slaty-backed Gull was not present, but we did have nice views of two immature Glaucous Gulls.  Most of the other birds were Herring Gulls, with just a couple of Ring-bills, but no other species could be definitely identified.
Our final stop was back at the landfill ponds, where a nice 1st cycle Iceland Gull was spotted.  Two immature Glaucous Gulls were also present, as well as a 2nd cycle bird that was likely a Thayer’s/Iceland intergrade.  We lingered for a while, hoping the Slaty-backed would show up, but everyone eventually gave up and headed home.
Thanks to Jeff Baughman for co-leading this trip, and to everyone who participated.