Birders began arriving around 7:30 AM at the lower parking lot at Harrington Beach State Park, under cloudy skies and with a brisk NE wind. The temperature started around 46 degrees, and later rose to about 52. An Eastern Bluebird was calling, and a group of about 35 Pine Siskins were soon spotted as they busily fed in a nearby birch tree.

One of the highlight birds of the day was sighted about 7:50 – a Philadelphia Vireo sitting in another nearby tree. It cooperated for a minute or two, so that many could see it, but then the bird took flight and disappeared. Then around 8:00, a Common Loon came flying past us, over Lake Michigan and just over the treetops – providing nice looks for a short time.

A few Dark-eyed Juncos and White-crowned Sparrows were viewed on the edge of the parking lot, but the nearby trees seemed strangely devoid of birds. A few Yellow-rumped Warblers and Golden-crowned Kinglets were spotted, along with a couple of Yellow-bellied Sapsuckers. A few lone Bald Eagles flew past over the nearby beach and just behind the treetops – consisting of two immatures and one adult. Unfortunately, those were the only hawks we observed – likely due to the winds being from the wrong direction for hawk migration. 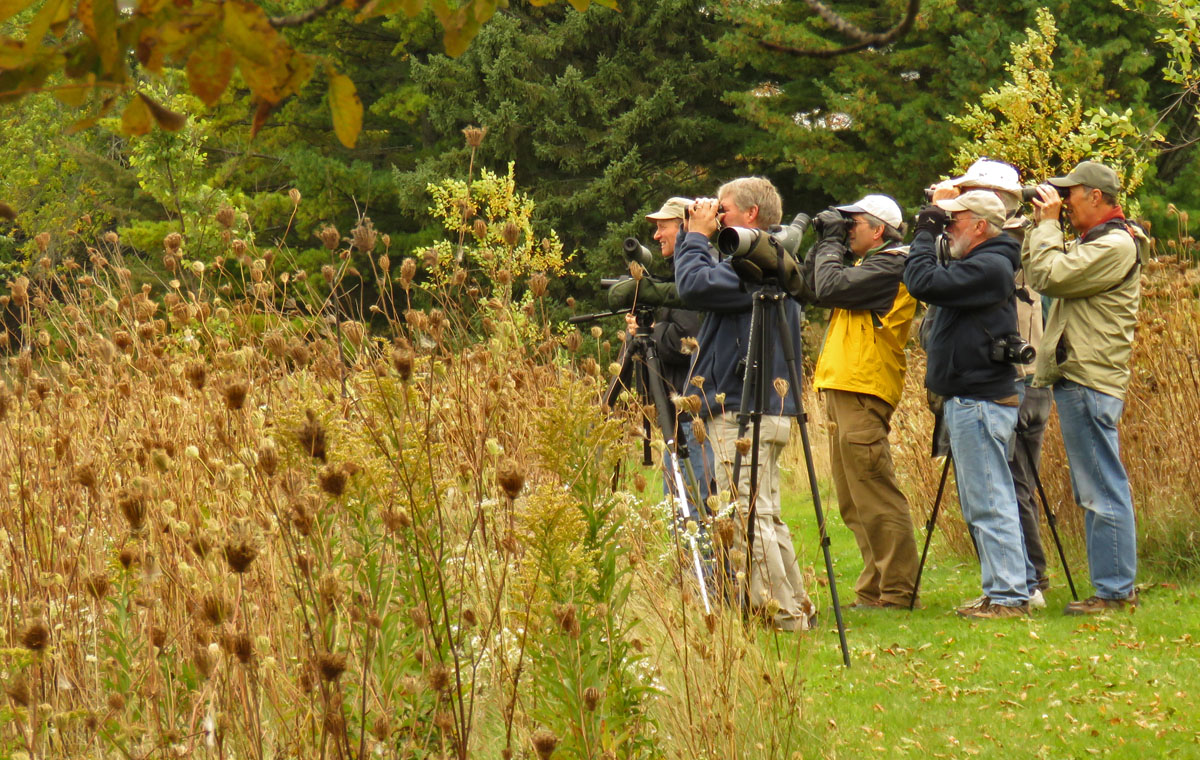 Around 9:00 AM our group of approximately 30 decided to leave the parking area and walk southward toward the quarry lake and the lakeshore. Just a short walk down the park roadway a Black-throated Blue Warbler was spotted, in the company of a few Yellow-rumpeds and Palms, providing one of the days’ highlights.  White-crowned Sparrows and juncos were found foraging near the quarry lake.

Once we got over to Lake Michigan, the fairly strong northeast wind was causing rolling waves, making it difficult to see birds on the water, but a couple of Horned Grebes were briefly spotted. A few Red-breasted Mergansers flew past the group, but the best bird was a male White-winged Scoter that gave us a very nice fly-by view, as it passed by from south to north.

After about 20 minutes we left the lakeshore and walked over to the nature trail. A few lucky people were able to spot a Winter Wren and a House Wren, and another sapsucker was found. A thrush was spotted, but it proved uncooperative when it soon disappeared.

About 10:30 we drove up to Puckett’s Pond and walked around on the grassy area that bordered the extensive shrubs and trees. An Eastern Towhee was found, as well as a Gray Catbird and several Yellow-rumped Warblers, Ruby-crowned Kinglets, juncos, and White-crowned Sparrows.

After about 40 minutes we left and drove a few miles south to Forest Beach Migratory Preserve, where the feeders near the headquarters building had a number of Chipping and White-crowned Sparrows. We hiked a trail that took us over to the observation platform, and on the way we spotted one of the day’s few hawks – a Cooper’s, which flew past heading south.

A Red-tailed Hawk and several Turkey Vultures were also observed from the tower, and a group of ten meadowlarks provided a brief, distant fly-by through a scope view. Unfortunately they couldn’t be re-found by the rest of the group, but a Song Sparrow was spotted nearby. On the walk back to the parking area an Eastern Phoebe was spotted near the pond, and more kinglets and warblers worked in the trees.

The field trip concluded about 12:20 PM. Although it was not a productive day for hawk watching, the group still had several nice highlights. Thanks to Jeff Baughman for co-leading this event.