The educational DVD of "From Billions to None", which premiered at the 2014 WSO convention in Prairie du Chien, is now available for classroom and group use. The DVD includes the full film by David Mrazek and Joel Greenberg, special features and a new 47-page guide for middle and high school classes.

The film presents the cautionary tale of the rapid extinction of America's once most-abundant bird -- the Passenger Pigeon-- and explores its compelling lessons for today.

Licensed copies for K-12 schools, public libraries, and community groups are available for $89. For more information, to view the trailer or to download the free study guide go to: Billions to None. 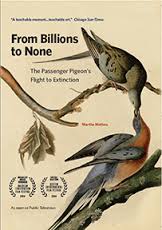 From Billions to None tells the compelling, little-known story of the rapid extinction of the once abundant Passenger Pigeon, and explores its lessons for today with the alarming decline of many species worldwide. These sleek and beautiful birds darkened entire skies, like nothing in existence today. Yet, in a matter of decades, human activity drove the species to extinction.

For millenia, the Passenger Pigeon was the most abundant bird in North America and likely the world. Then, as its forest habitats were cut down for lumber, it was hunted to extinction both as a cheap source of protein and as targets for sport shooting. By 1912, after a nationwide search, not a single bird could be found living in the wild. The last pigeon in captivity died in the Cinncinnati Zoo in 1914.

Naturalist and author Greenberg is the film's guide, explaining the biology of the Passenger Pigeon and taking us through the birds' tragic history. In one scene, Greenberg visits a nature preserve in Wisconsin that was once the largest ever Passenger Pigeon nesting site, where an estimated 136 million birds nested in an area equal in size to 37 Manhatten Islands.