I’m sure we’re all concerned about the consequences of bird strikes.

So was 7-year-old Quinn Steinman of Slinger. She and her mother discovered a woodpecker in their yard that had died after striking a window.

Quinn wanted to learn how to keep other birds from flying into a window. With her mom’s help, they contacted avian specialists at the Milwaukee County Zoo. Based on their advice, Quinn made a plan.

With the funds from her WSO Youth Grant, she purchased decals and other materials. She not only put decals on windows in her house, but after sharing what she learned with her 1st grade classmates and teachers they put decals on windows at their school. They also visited the Milwaukee County Zoo and some decals were also put on windows there.

Aiden Laureli had seen Bald Eagles from his house in Mosinee. He knew eagles have good eyesight and sharp claws. He wanted to learn about where they live, how big they get and how far they can see. With his mom’s help Aiden, too, applied for our Youth Grant.

They have an eagle picture in their StoryBook Kids 4K classroom. When his teacher asked Aiden and his classmates what kind of bird it was, he knew. With the grant funds, several books, an eagle puppet and an eagle talon replica were purchased. They also bought cloth to make an eagle outfit.

One of the activities was to outline a 5-foot circle with shredded paper to see how big an eagle’s nest could be. They also viewed online an eagle sitting on a nest. A few days later, they were outside and excitedly watched an eagle fly overhead.

Lydia Martin of Mount Horeb applied for a WSO Youth Grant because she wanted to create a native plant garden to attract songbirds and butterflies to the “Hearts and Hands Daycare Center.” She was going to plant a native garden in May so the children their can see and enjoy whatever visits. “It would be like a daily field trip,” she wrote in her application.

Sophia Danielson and Raina Bryan are 5th graders at Amery Intermediate School in Amery. They have a 5-acre school forest that their classes are able to walk through. 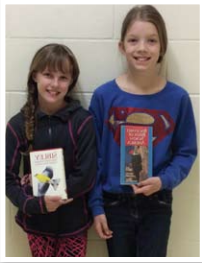 The bird ID books they have are well used. They applied for a WSO Youth Grant to purchase 20 copies of “Wild about Wisconsin Birds” and have been enjoying using them to identify and learn about the birds they see there.

Also worth noting, fifth grade teachers Samantha Montana, Sue Bielmeier and Jeremiah Fisk, from the school, along with Principal Oralee Schock, were able to attend a Flying Wild educator workshop in March in Chippewa Falls. They not only learned many new things to use with their classes, but came away excited for spring and a chance to share that knowledge with the children.

Do you remember when you learned that the bird with the red breast is an American Robin? Or that the robin is Wisconsin’s state bird? Then you couldn’t wait to see them because that meant spring was here. The grant awarded to Owen Maguire focused on learning all about the American Robin. Owen attended Bethlehem Community 4K in Rothschild. Students there not only learned what a robin looks like, but also learned its call. They learned about their nests and that the eggs are blue. They put out a feeder with meal worms, but soon learned that robins prefer earthworms.

Two months later they were asked to share something they remembered. Grady said, “Robins have red tummies. When they talk they say ‘cheer-up.’ ” Lily answered: “The momma lays the eggs and the dad sings when the eggs are hatching. Both the momma and daddy get worms. When the babies are born, their eyes are closed.”

The school had a family night in April with the theme “Wondering in Nature.” They turned a kiddy pool into a robin’s nest and displayed many of their projects in it. Also on display was the bird song identifier they had purchased with grant money and used to learn the calls of many other birds, some of which the children also saw.

Most of the grant recipients published stories in newsletters or local newspapers about their activities. Included were thank yous to WSO for providing the funding to make their activities possible.

Applications for the next round of WSO Youth Grant are due October 1! For more information, visit our Grants webpage.