A lot's been happening this past year at WSO's Harold and Carla Kruse Honey Creek Nature Preserve west of Prairie du Sac in the Baraboo Hills. 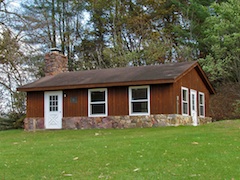 The earliest big change at the preserve's Cox Nature Center was the addition of the set of large new information signs that WSO President Kim Kreitinger designed for the interior walls. To make room for the signs, a number of old items came down during one of last year's work parties when the building was thoroughly cleaned. The interior improvements brought to our attention the poor condition of most of the windows.

After considering repairs, we decided to replace them. Jacob Brickel, a local carpenter, replaced all six windows during 2014. The new window frames were primed, and a couple of them painted, before it got too cold last November. We hope to finish the painting this summer.

This spring, we turned our attention to the dark and dirty outhouses. During our April work party, both were thoroughly cleaned, including the windows and began painting the interior walls. We would like to continue the interior painting to brighten them up.

Earlier in April, Dave Berneir, after volunteering for a TNC Baraboo Hills work party, took his chainsaw up our Honey Creek Trail to clear it of fallen trees. Where a large windfall tree blocked the trail, Dave created a short detour route where he could cut the main trunk and large branches out of the way. His efforts made it easier for the Birdathon hikers and others to go up the trail.

You will notice some new boardwalk sections and some repaired ones along the trail thanks to Dan Pickarts and his crew. Dan had saved some boards last year and bought some support boards to make new sections of boardwalk, which he and his helpers installed during our work day.

We also now have a large, two-panel sign near the main entrance to the Honey Creek Trail along Sky View Road. It was designed by Cary Reich, a sign specialist with The Nature Conservancy. 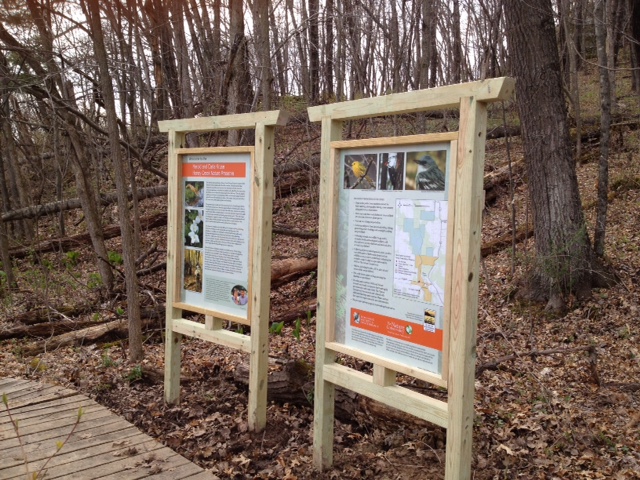 To get the signs framed and installed, we turned to Tom Kraft, a skilled carpenter that lives nearby on Hemlock Road. Working from photos of signs TNC had built, Tom constructed a frame for each sign and then mounted each between 4' x 4' posts. During the April work party, post holes for the new signposts.

The Quercus Land Stewardship Services crew continues to treat the ever-present garlic mustard. For three days in May 2014 and again in May 2015, a crew of 4-6 people with backpack sprayers hiked all over WSO land treating the garlic mustard. They continue to find more garlic mustard than expected, but it is less dense and less widespread than in the past.

Thank you to all of those who have helped out at Honey Creek this past year. Special thanks to Jesse Peterson for organizing the May Birdathon/Bandathon, which raises money for the work being done here.